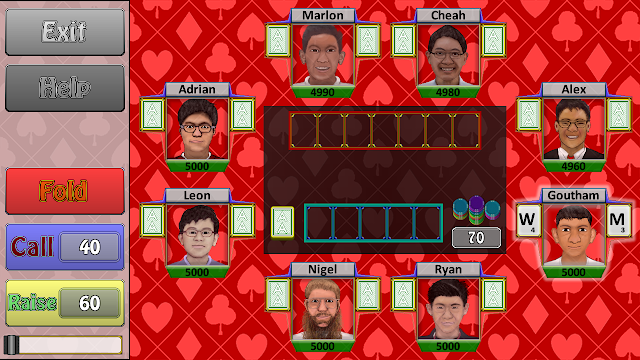 Its Texas poker, in Scrabble mode.

Most of the rules of Poker govern the game, but instead of making a 5 card hand to decide the winner, the goal would be to make the strongest word possible using both your 2 cards and the 5 cards on the board.

There are many poker websites that can tell you this a lot better than i ever can. But, the basic concepts you need to know, at least for this game are..

Each player is dealt 2 cards at the start of every round
The dealer and the guy next to the dealer place the initial bets (the small and big blinds).

Each player thereafter has to either match the highest bet by CALLING, or increase the highest bet by RAISING a value equal to a multiple of the big blind. This does of course take into account the money you've already contributed to the pot already.

The first betting round ends when everybody has contributed equally to the pot.

3 cards are dealt to the board, and another round of betting begins, though for this round, there will be no initial bet so players can CHECK, which is equal to calling zero.

After the 2nd betting round, a 4th card is dealt and a 3rd round of betting will take place. After that, the final card will be dealth (Take note that, unlike actual poker, there is no final betting round)

Then everybody has to form a word using BOTH their 2 cards and any/all of the community cards on the board.

Whoever forms the strongest word takes the pot. In case of ties, the pot is split evenly.

If you need to know, the score for a word is calculated as (Word Length * 10) + (Face Value of the word). So technically, some joker who manages to get MUZJIK as his word will beat out some other joker who has RETINAS as his word. Isnt that fun?

You choose one player, and between 3 to 7 AI players and pretty much win by busting everyone else.


In solo mode, you control all 8 players. Every 5 turns, half the players will be secretly marked and your score will be based on whether those players profit or not. However, in solo mode, there is a maximum bet limit imposed as well as a 'maximum fold limit' where you can only fold up to half the number of players minus 1. This mode is a tad unconventional but definitely worth a try.

Tournament Mode - 2 tokens per hand won, and another varying bundle (based on number of players and starting money) for winning the match.