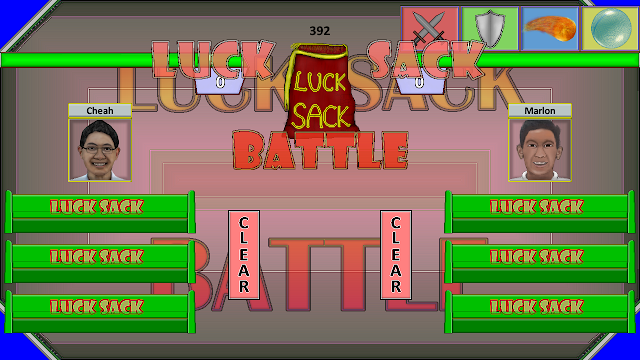 Lucksack battle is a Scrabblesque mortal combat to the death. 2 Players duke it out 1 v 1 by drawing tiles from a bag and attacking by forming words

You play by drawing tiles from the luck sack to fill up your racks.

Once you have a word you are happy with, you then hit one of the 4 action button : Physical Attack, Physical Shield, Special Attack or Special Shield

The physical and special attack options will launch one of 4 different types of attacks at the opponent based on the length of the word that you form.

Each of the attacks will interact differently with each other and with the shields, and you'll figure it all out as you play the game! (or by reading the ingame instructions)

The round ends when either player runs out of hp, or when the tile bag runs out.

The word originated in Singapore and was coined by some of its regular players. It hasn't really been too long and this word has already spread well outside the country.

lucksack, n : A person who repeatedly pulls off miraculous stunts that can only be attributed to sheer luck.

lucksack, v : To commit a miraculous stunt that can only be attributed to sheer luck
Some examples would be drawing a bingo after playing one, especially when many bad tiles persist in the bag or drawing that one tile that you were fishing for even if there's only one of it left in the bag.

No ratio here, you just get a fixed amount for winning.