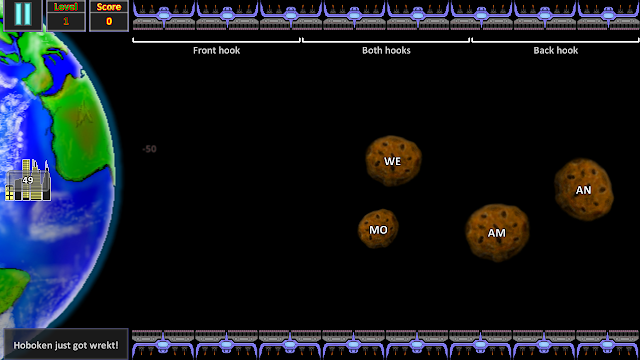 S Wave is an arcade game where gigantic asteroids are hurtling towards the Earth and you have to protect it by destroying all the asteroids.
Fortunately, spring ships have posted themselves to the north and south of the asteroids, and they pretty much either wreck asteroids on impact or bounce them off.(and you wonder why they aren't surrounding the Earth itself)

You play by flicking the asteroids towards the top or bottom. Which direction you flick them in depends on whether the words printed on the asteroids take an S behind, infront, both or not at all.

For example, WE has no S hook, so you fling it south.

AM has a front S hook to make SAM so you fling it to the top left corner.

MO has a back S hook to make MOS so you toss it to the top right corner.

And finally AN has both S hooks to make SAN and ANS so you flick it to the top center.

When an asteroid hits the Earth, a random city.. which may very well be where you live.. will get obliterated. So.. you have a pretty big incentive to keep the planet safe.

The game is over when 50 cities have been wrekt.. or when you choose to end the game manually. More the latter than not.

The game starts out with 2 letter words, but will slowly expand to 3s,4s all the way up to 7s.